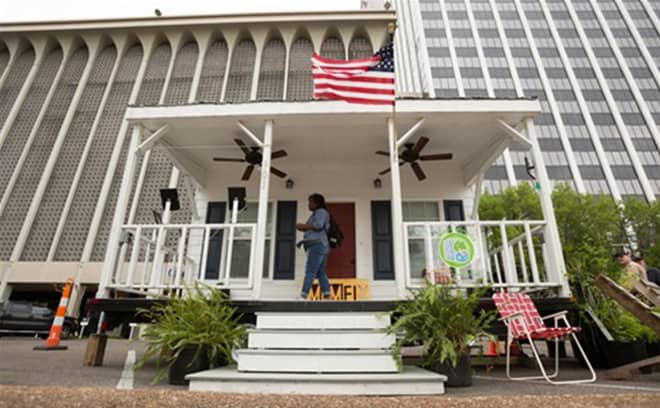 East Memphis’ most prominent office towers, Clark Tower and the iBank Tower, are anchors in a strategy to make the Poplar Avenue-facing corner more walkable and memorable.

Late last year, In-Rel Properties purchased the iBank Tower, bringing both towers under the same ownership for the first time. The Florida-based real estate group plans to unite the 16-acre office campus with increased connections to the surrounding East Memphis restaurants and retail.

Employees got a taste of those changes on March 30, during a mini-MEMFix event hosted by Livable Memphis. MEMFix events are pop-up engagement and streetscape strategies to highlight the possibility of underutilized neighborhoods. Or in the case of the towers’ area, underutilized parking lots.

“When you walk on the site, all you see are cars,” said John Paul Schaeffer, program director with Livable Memphis.

Though within walking distance of each other, the two towers, the DoubleTree Hotel, the Malco Paradiso theater, Whole Foods, the Sanderlin Centre, Brookhaven Circle, the Clark Center and the surrounding condo community might as well be islands connected by a sea of parking.

“You’ve got Poplar frontage here,” Schaeffer said. “You’ve got so many destinations. We just need the land use and the transportation to work out.”

As part of the event, some of the area’s restaurants encouraged foot traffic by offering lunch and happy hour discounts to employees. The Mini MEMFix picked up again between 5 and 7 p.m. to ease the transition between the area’s concentrations of work and play, with many restaurants just steps away from the two towers.

Livable Memphis, an entity of the Community Development Council, also brought along its Mobile Front Porch, a kitschy front porch on wheels that houses iPads for conducting surveys.

Throughout the day, employees of the two towers, which have a combined million square feet, provided feedback on the area’s challenges.

Greg Hyde, who owns ad agency G Design and operates out of Clark Tower, said that while the layout of the towers area lends itself to pedestrian traffic, there just isn’t enough infrastructure to support it. He would like to ride his bike to work, but there isn’t a secure place to leave it. Overall, he was glad to have an opportunity to voice his concerns and hopes it leads to visible change.

“I think events like this can help people think of the workplace as more of a community,” he added.

Feedback from the event will help fuel the next strategies in improving the area, said Kemp Conrad with Cushman & Wakefield/Commercial Advisors.

“What we’ve got here is a mini-CBD (Central Business District),” he said.

As the brokerage firm for the towers, Conrad’s team is engaging the rest of the area’s landowners to make improvements and connections between the major properties.

Some of those changes have already started to take hold, with the owner of the DoubleTree carving out an entryway in the hedge fence to make the hotel more accessible to those wanting to walk to the area’s restaurants.

More substantial changes, like installing a gateway at Mendenhall or branding the area with a new name, Conrad believes will come with a neighborhood association.

“There could almost be like a Downtown Memphis Commission for this area. That’s something that’ s been talked about as a possibility, almost with an assessment with something like a TIF (Tax Increment Financing) district.”

Some other possibilities include constructing a rooftop garden on top of the parking garage or using some of the parking lot area for a building that would provide services to the area’s employees.

“I think it’s huge for occupancy,” Conrad added. “Even though they’re older buildings, they’re being renovated. Then when you start adding that piece of it, with the story to tell about the area working together, that drives more business for everybody around here.”