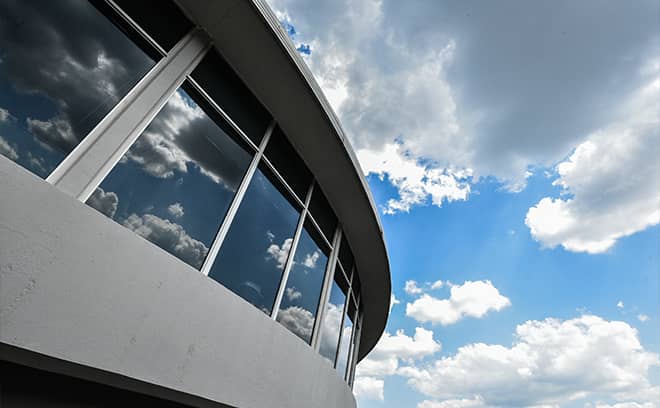 The vast parking lots between and around the neighboring Clark and iBank towers catered a bit more to walkers on Wednesday, thanks to MEMfix East.

Numerous signs posted on lightposts told pedestrians how many minutes it would take to walk to nearby restaurants and other destinations.

“It’s a 3 minute walk to Whole Foods & Houston’s,” states one sign that also pointed the way. “It’s a 1 minute walk to Casablanca, Bosses Wings and Lisa’s Lunchbox,” states another.

And a few crosswalks across the interior drives were freshly repainted in bright Christmas colors, red and green.

Such MEMfix events are designed to demonstrate how changes to neighborhood infrastructure can promote walking and cycling while calming traffic.

The first phase of this MEMfix occurred 11 a.m. to 2 p.m. Wednesday, complete with Livable Memphis’s Mobile Porch where passersby could offer their ideas on how to improve the business district. The second phase, weather permitting, was to occur 5 to 7 p.m. Wednesday along the neighboring Brookhaven Circle West.

MEMfix East was the seventh MEMfix, but the first that sought to improve a district built after World War II and almost exclusively for the car-centric lifestyle of the suburbs.

“I’d say a successful outcome would be that regardless of whether they were going to Brookhaven Circle (the commercial street on the east side of Clark Tower) or walking over to shop down on Poplar or even going to Whole Foods maybe to get some groceries, that they’d be able to walk out of here and have a legible network of pedestrian pathways, way-finding signage, things like that,” said John Paul Shaffer, program director for Livable Memphis. It’s the nonprofit organization that takes the lead on MEMfix events.

“… Longterm, maybe it’s a business association, (or) a business improvement district comes together and looks at some of the parking lots and says, ‘We can make better use of some of this space. Do we do liner buildings on parking lots?… Do we look at doing some (parking) decks for shared benefit and take some of the cars off of the surface and get them into (parking) decks? Or do we look at tying into the bus rapid transit options that might be coming down the pike?”

A master plan prepared by the landscape architecture firm Blair Parker Design shows a network of six types of pedestrians paths that could be established in and around the towers.

A key participant in carrying out such a plan would be In-Rel Properties, which now owns both office towers. The Florida-based In-Rel has started making $6 million worth of improvements inside and outside the buildings, and has said it plans to create an 18-acre office campus around the towers.