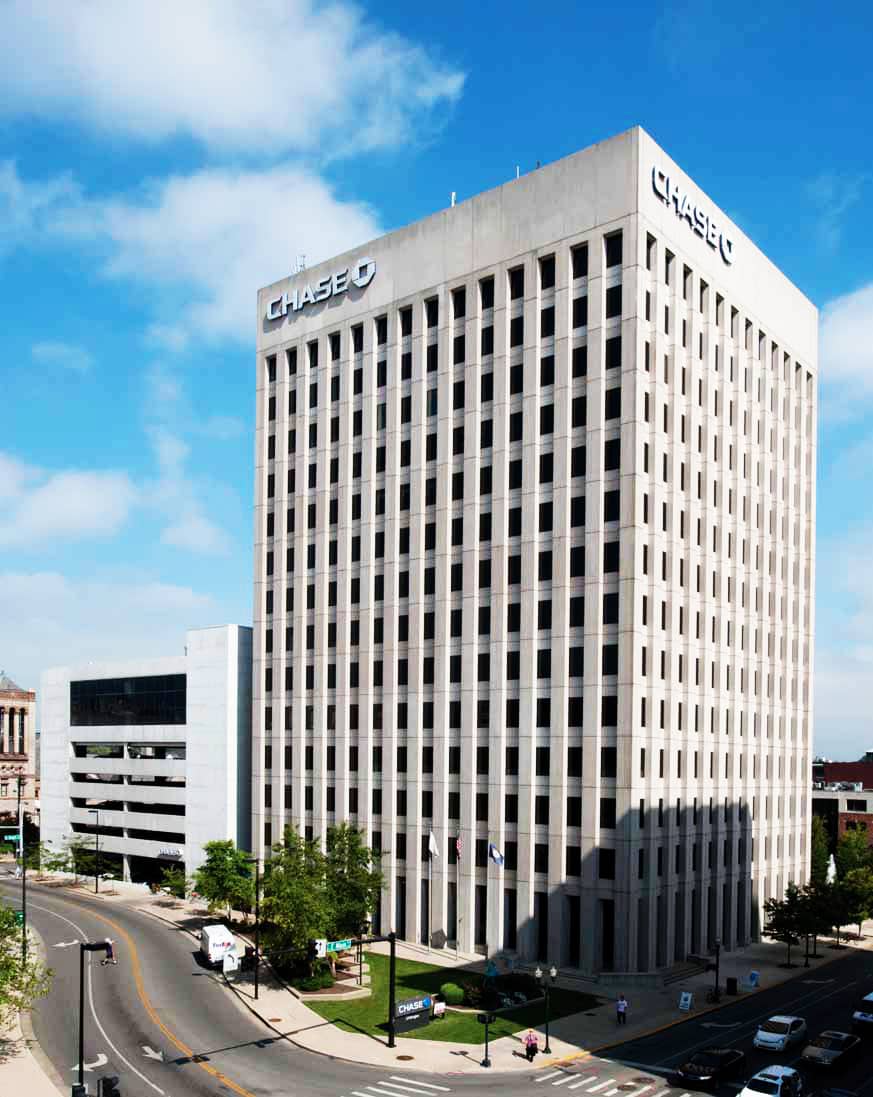 Built in 1973, Chase Tower has remained a foundational fixture of Lexington’s Central Business District for over 47 years. The 14- story, 240,000 square foot office tower has experienced major changes over the past 15 years and is currently over 90% occupied.

Era of Transition – In 2009, Chase Tower experienced the re-alignment of JPMorgan Chase Bank’s regional headquarters. The property subsequently went into Receivership in 2009. Bruce Isaac, SIOR, CCIM, the court appointed Receiver, hired NAI Isaac as Chase Tower’s Property Manager and Leasing Agent. NAI Isaac worked closely with the Receiver and with the Special Loan Servicer to stabilize the asset through leasing and effective cash management. During the Receivership period, which lasted just over three years, NAI Isaac increased Chase Tower’s tenant occupancy rate by 24.7%. In 2013, NAI Isaac co-brokered the sale of the property to In-Rel Properties, a privately held, vertically integrated real estate investment and management firm based in Florida.

New Owner, New Approach – In-Rel Properties made the decision to retain NAI Isaac as the Property Manager and Leasing Agent for Chase Tower and maintains the relationship to this day. “We are very fortunate to work with a property owner who is not afraid of creative leasing strategies. This has led to a diverse tenant mix within the tower. We now have traditional office users sharing space with large-scale IT companies, government agencies, and a well-known local hospitality/catering company,” says Paul Ray Smith, Executive Vice President of NAI Isaac. This nuanced leasing strategy ensures that Chase Tower’s occupancy rate consistently trends upward. Leasing activity continues to remain active, with the building over 90% occupied.

Fitting Up for the Future – NAI Isaac’s Property Management team has worked to successfully implement several major renovation projects to accommodate tenants and update the amenities available within the building. Extensive renovations to the property’s lobby and exterior fountain area occurred in 2013. Since that time, the building’s 3 rd , and 5 th through 8 th floors have been completely gutted and renovated to accommodate single user and multi-tenant suites. The building’s 404 space parking garage went through a $650,000 structural renovation in 2012 and a technology upgrade in 2017. “These renovations ensure that Chase Tower is well-poised to accommodate tenants of any size and scope, from local smalloffice users to international corporations looking for open-air office concepts,” says Anne Kilcoyne, CPM, Senior Property Manager.

Global Connections, Strategic Relationships – In-Rel Properties has expanded its Kentucky portfolio through the purchase of a building in downtown Louisville and Executive Place office building in Lexington. “Our positive relationship with NAI Isaac directly led to our decision to work with NAI Fortis, the Louisville affiliate of NAI Global, to grow our holdings within Kentucky. Our confidence in NAI Isaac laid the foundation for working with other NAI firms in the future,” says Dennis Udwin, Founding Principal of In-Rel Properties. “We look forward to working with NAI as we move into other markets.”